New York City has been out of compliance of federal special education rules for the past 13 years, according to the state Education Department.


In 2014, Mayor Bill de Blasio promised to lessen parents’ burdens by speeding up decisions on tuition reimbursement. The problem with that plan, according to advocates, is that an influx of new cases overwhelmed an already jam-packed and burdened hearing system. The number of complaints jumped to 51% during the following three school years, according to the state report.

From the 2013-14 school year to the 2017-18 school year, Department of Education officials reported that the number of special education students increased from nearly 20,000 to roughly 224,000. School officials said they’ve hired 4,300 more special education staffers over that same period, including 3,000 more teachers, noting that the state Education Department is responsible for hiring hearing officers.

Since the state report’s publication in May, the Department of Education has submitted a corrective action plan to the state Education Department with a strategy to fix the impartial hearing process and the allocation of educational services for children who have special needs. While both agencies declined to provide the plan, Danielle Filson, a spokesperson for the city Department of Education expressed in a statement that improvements are underway.

Elizabeth Kirk, a mother of three teenagers who have required special education services, said that while she does not entirely blame the schools that lack resources to serve students with special needs, she does put the responsibility on the Department of Education to fill in the gaps. Kirk claimed she has filed at least six due process complains over the years – including seeking repayment for her kids’ evaluations that their Manhattan schools refused to do.

“The problem is they don’t do what they’re supposed to do, so you have no choice but to fight,” said Kirk. “Ultimately, if you can’t hire other people to do it, it’s just impossible to work a full time job and take care of your children’s needs. That becomes your job.”

Mary Delgado, a mother from Queens, recognizes this familiar feeling of stress. For months, she has been transporting her 4-year-old son Joaquin Rodriguez, who has autism as well as medical issues, for therapy sessions in Howard Beach and Rego Park.

The Department of Education would not approve a paraprofessional for Joaquin, so despite the fact that St. Mary’s Special Needs Preschool in Queens had accepted him as a student on the condition he had been provided one, his preschool placement fell through in the fall of 2017.

Delgado said she had not been informed about the Department of Education denying the paraprofessional until she tried bringing Joaquin to the school, where she was told his spot had been given away.

In January of 2018, the Department of Education suggested a school for Joaquin that did not comply with his Individualized Education Program, a legal document known as IEP, so Delgado filed an impartial hearing complaint. She ended up receiving applied behavioral analysis therapy for her son at home, physical and occupational therapy in Brooklyn, and speech therapy in Queens, as well as the occasional therapy sessions at Bridge Kids in Manhattan.

“Normally, kids get all these services at school. But he’s not in school.” Delgado said. “I can’t work. This is my full-time job.”

Fortunately, she will receive some relief on Monday, when Joaquin begins his first real day of school at The Manhattan Behavioral Center. Delgado’s attorney, Elisa Hyman, said that this is a common example of the kinds of battles that parents face with the Department of Education.

“Our clients are experiencing problems across the board,” Hyman said. “We have many clients who have been out of school or in the wrong class for extensive periods of time, missed therapies, did not have their IEPs implemented and were not receiving nursing, paraprofessionals, busing services or transportation accommodations.”

Roughly one out of five city public school students have an IEP. Department of Education officials said they recently added $33 million for new special education services or programs for the upcoming school year, after having spent $5.1 billion in the last school year. This comes from a city school budget of more than $27 billion. 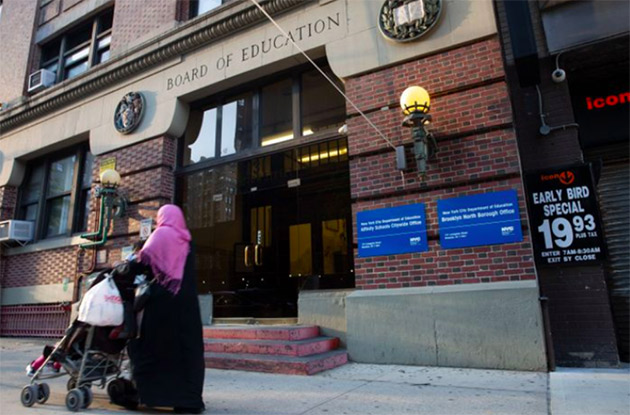 To ease a massive backlog of special education complaints in New York City, state officials on Monday proposed changes to rules about who can preside ...