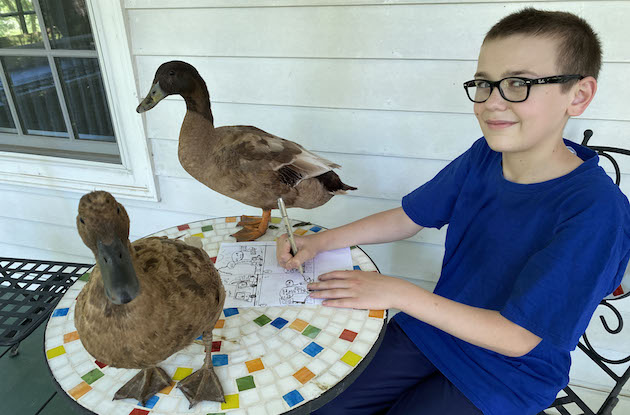 Henry says he brought his pet ducks and chickens to the fair last year, so he was inspired to bring it to life through his comic while simultaneously raising awareness for the fair and raising funds for New York State's 4-H Foundation.


The comic features quintessential fair sightings like musical performances, animal exhibits, and prize-winning vegetables. In order to create the comic "Unexpected Events at the Putnam County Fair" Henry referenced old family photos, fairground images, and the Putnam County Sherriff's website to draw a patrol car. Henry explained that he wanted his comic to seem like the real fair with his own characters.

"The Putnam County Sheriff's Department supports our youth and commends 13-year-old Henry McEvoy who is using the art of drawing as a safe way to celebrate community events during this pandemic," said Sheriff Robert L. Langley Jr. "We especially like Henry's drawing of the Deputy Patrol car, and wish Henry luck with his 4-H fundraiser."

To download the comic and make a donation to 4-H and fund scholarships for educational programs throughout New York state, click here.

The Salvation Army Greater NY Division will help those in need this Thanksgiving week by preparing more than 25,000 meals throughout New York.

Orchestra 914 presents an array of holiday favorites that will set the tone for this magical time of year.

Shames JCC on the Hudson

Tarrytown , Providing in-person programs for 2s, 3s, and 4s with a focus on Outdoor Learning, an Emergent Curriculum, and COVID-19 Safety.