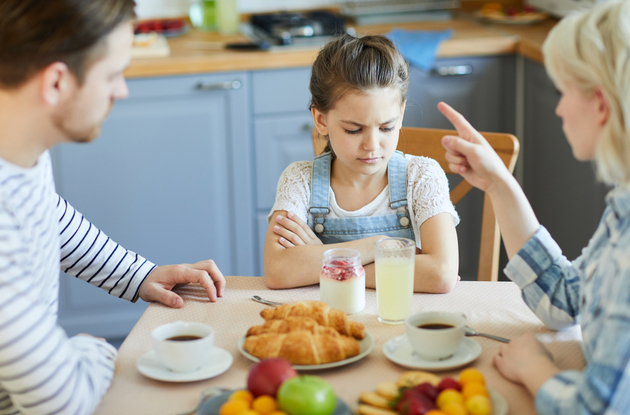 This Is How to Avoid Saying No Too Much to Children

Here's how to avoid too much negativity in your parenting style


Alternatives for saying 'Don't!' to toddlers: It's important to keep directions minimal for toddlers. "They don't need, or understand, a lecture about why it is a bad idea to throw the remote control at the cat," says Ari Brown, M.D., author of Toddler 411: Clear Answers and Smart Advice for Your Toddler. "Keep it simple! If you say too much, they'll just tune you out," Brown says.

How to Avoid Saying "No" to Preschoolers

Why it's important to be positive: Preschoolers are also becoming more social beings. They're learning how their actions and feelings matter in the large scope of things. They're also conflicted between wanting to be big boys or girls and wanting to be babies. It's a great time to heap positive praise on them for the new things they're learning; not criticize them for not being a "big girl" or a "big boy," Borba says. Their self-image is kicking in big time, and they're starting to compare themselves to other children.

At about 4 years old, when children are growing naturally more independent, power struggles can also escalate. "At this age, you should ask your children a lot of questions to get them more involved in making everyday decisions," Dr. Nelsen advises. "Give them as much power as they can handle. The more involved they are in the household, the better."

Negativity trap: For many parents, power struggles with their preschoolers create a cycle that's hard to break. A parent will tell them to do something, like put shoes on, and they say they don't want to, or just ignore them. Parent becomes more frustrated, and negative; child responds negatively back to the parent. "If you want to avoid power struggles," Dr. Nelson says, "you need to quit trying to take all of their power." This sounds good, but how can a parent realistically put this idea into practice on a daily basis? "Ask them nicely. Help them. Put their shoes in front of them," Dr. Nelsen offers.

Preschoolers are little petri dishes of developing self-esteem, and it's critical to separate the behavior from the child at this phase. "Because children have huge language leaps here, our lectures tend to get longer, and the meaning of them can get lost," Borba says. "Children might hear longer lectures and internalize them as 'I'm not good' as opposed to 'that thing I did wasn't good.' So remember to label the action, and not the child.

Alternatives for saying 'Don't!' to preschoolers: Preschoolers are a rules-based group. For them, everything is black and white. The concept of fairness is big, and they can be rigid around that idea. "Rules are neutral, they're simple, and they're clear," Dr. Berman says. "Choose the three most important rules of your house, hang them up somewhere, and review them with your child on a daily basis." Make them positive: Instead of saying, "Don't jump on the furniture," you can write, "Sit on the furniture." Kids at this age aren't fully reading yet, so it can be powerful to take pictures of them doing something the right way and tape it to the rules. Then, if the rule is broken, you can say "Rule!" and over time they'll make the connection. You can also teach them now that rules in each house might be different, so if they're going to someone else's home for a playdate, they may need to follow different rules.

How to Avoid Saying "No" to School-Age Children

Why it's important to be positive: "School-aged kids are developing their worldview. At this age, they're literally becoming pessimists or optimists," Borba says. Studies have shown that optimists are better learners and more resilient overall, so instilling a sense of positivity in your child can impact the way she experiences her entire education.

Negativity trap: Most parents have become set in a particular communication style with their children by the time the kids reach 6 or 7. "At this age, it's frankly easy to forget to be positive," Borba says. "When the kids were younger, we were so excited by their first everything. We'd jump up and down when they did x or y, and praise them till the cows came home. It's natural for this level of praise to erode away over time."

At this juncture, the negativity tables have been turned, and the children have learned to manipulate their parents. All of our whining that they've absorbed over time is being used on us now. If whining works, kids are going to whine until they get what they want.

"The problem with this," Borba explains, "is that whining moves into backtalk, which moves into disrespect, which eventually moves into the defiance we begin to see in late tweens and early teenagers."

Alternatives for saying 'Don't!' to school-age children: For "Yellow Behaviors," those annoying things that don't involve safety issues, the best approach is to ignore. "Silence is golden," Borba says. "Nothing ends a behavior faster than ignoring it."

Children who are 6 and 7 are also thinking analytically, so it's important to their development to continue including them in decision-making. "If they have soccer practice after school, you can ask them, 'What do you need to bring with you?'" offers Karen Ruskin, Psy.D., author of 9 Key Techniques for Raising Respectful Children. "Ultimately, they feel respected because you've involved them in the decision-making process," she says.

Author: Rachel Aydt is a freelance writer and assistant professor of journalism at NYC's The New School. She lives in Manhattan with her husband and son. Find more of her writing at nymetroparents.com/author/Rachel-Aydt and NewYorkLostandFound.blogspot.com. See More Huntington, NY The Tooth Pillow Dentistry is a group of board-certified pediatric dentists and dentist anesthesiologists that work together to safely provide dental ...