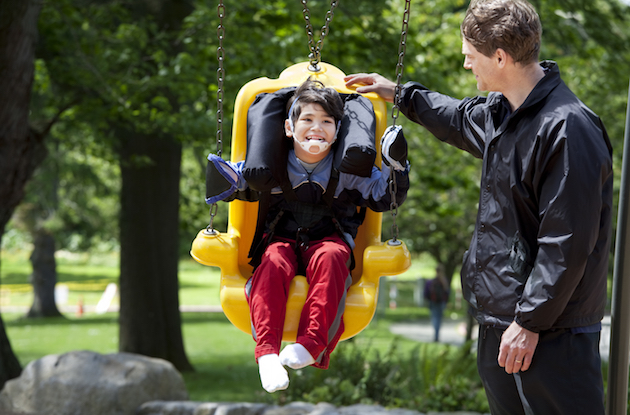 These are the accessible, ADA-compliant playgrounds in the New York metro area, where children of all abilities can play together.

Park Slope Playground
Berkeley Place and Lincoln Place between Fifth Avenue and Sixth Avenue, Park Slope
Level 2
This playground, adjacent to Park Slope School 282, is a popular and active community destination. People love the variety of play spaces for both younger and older kids and the summer sprinklers and water features.

Beach 30th Street Playground
Boardwalk between Beach 29th and Beach 30th Streets, Rockaway Beach
Level 3
This accessible playground is just steps from the ocean. The playground's equipment has a nautical theme, with a climbable ship and lots of water play. It has universally accessible swings as well as an adaptive swing. It is ideal for climbers as it has ropes that are pretty low to the ground making it accessible for all.

Jurassic Playground
Flushing Meadows Corona Park, W/S of Meadow Lake and GC Parkway, Forest Hills
Level 2
Jurassic Playground features swings for tots and kids, a drinking fountain, benches, a flagpole with a yardarm, play equipment with safety surfacing, and Apatosaurus animal art. There are also images of dinosaurs, including the Stegosaurus, Triceratops, Ankylosaurus, and Dromaeosaurus, throughout the playground.

Laurelton Playground
Brookville Boulevard between 136th Avenue, 137th Avenue, Jamaica
Level 2
This playground features swings, a spray shower, and a precast Doric column. The spray shower is a cast-concrete lion. There is bronze, north-arrow rosette paving the path leading to the spray shower as well as a series of stainless steel Roman numerals. The steel play equipment is adorned with a Roman thematic plaque inscribed with SPQR (the Senate and People of Rome). The park also contains a thematic plaque at the entrance with the mythical founders of Rome, Romulus and Remus, and their mother, a wolf.

Locust Manor Playground
121st Avenue between Lucas Street and 192nd Street, St. Albans
Level 2
This playground serves the students at the adjoining P.S. 15 and the residents of Springfield Gardens. Named after the nearby Long Island Rail Road station, the site features a full basketball court and two handball courts, a children’s play area with play equipment, a spray shower and a comfort station, swings and checker tables.

Oakland Gardens
Springfield Boulevard between 53rd Avenue and 56th Avenue, Oakland Gardens
Level 2
This playground is home to four sets of play equipment and two swing sets, all with safety surfacing. There are benches and a flagpole with a yardarm. The park’s attractive cement art inlaid into the ground includes a compass and a butterfly-shaped spray shower. There are also basketball courts, handball courts, and a drinking fountain.

Playground For All Children
Flushing Meadows Corona Park, 111th Street and Saultell & 56th Avenues, Corona
Level 1
This is a Level 1–Playground for All Children that serves children with and without disabilities. Available to the public and to school and community groups, the playground offers a variety of recreational and instructional activities. This playground was designed to accommodate children using crutches, canes, walkers, or wheelchairs, and to provide many opportunities for social, cognitive, sensory and motor activity.

Andrew J. Parise Park
200 Cedarhurst Avenue, Cedarhurst
The playground at Andrew J. Parise Park has an accessible sprinkler area. There are ramps onto the play structures, ground-level play features, a small rock climber, and interactive play features throughout. There is no barrier to the entrance of the sprinkler area so it is very wheelchair friendly.

Bay Park
198 First Avenue, East Rockaway
This park was completely renovated in 2014 after Superstorm Sandy. Dedicated to six-year-old Sandy Hook school shooting victim Noah Pozner, this playground features multiple play structures, including one that has wheelchair accessible ramps, and a spray park. There are no lips or barriers to get into the spray park, making it easier for those in wheelchairs or with limited mobility to escape the summer heat.

Eisenhower Park Playground
Eisenhower Park, East Meadow
Eisenhower Park’s second inclusive playground can be found at Field 8 near the entrance at Stewart and Merrick avenues. Completed in 2016, it is part of an accessible sports field built so children of all abilities can participate in sports side by side. The playground has a large climbing structure with ramps and wide pathways, as well as wobbling lily pads, chin-up bars, and a spiral ladder. There are full-support swings, toddler and big-kid swings.

Haypath Inclusive Playground
23 Oxford Road, Old Bethpage
The playground at Haypath Park features sensory-based equipment. The equipment is positioned low enough to be accessible to those in wheelchairs, and the Fibar surface of the play area cushions impact but is stable enough for those with limited mobility.

Oceanside Park
3800 Mahlon Brower Drive, Oceanside
The only set of wheelchair-accessible swings on Long Island can be found at Oceanside Park. Unlike adaptive swings, these two swings allow the user to stay in the wheelchair. Ramps lock the wheelchair into place and the rider can engage a pull chain to propel the swing. The playground was also updated with a soft safety surface and new fencing.

Hermann Griem Park
Brown Boulevard, Wheatley Heights
Ramps make much of the play structure accessible by wheelchair. Tic-tac-toe, steering wheels and other interactive features on the playground are featured and are accessible for kids of most heights. Picnic areas, a ball field, tennis courts, and restrooms are also at the park.

Shorefront Park
49 Smith Street, Patchogue
This accessible playground includes a play structure that features double-wide ramps, interactive games, wheels to turn, slides, and bars that allow kids to pull themselves up onto the equipment. There are also two adaptive swings and a large play structure for older kids in a pirate-ship theme.

Sunken Meadow State Park
Route 25A and Sunken Meadow State Parkway, Kings Park
There are multiple playgrounds throughout the park, but the handicap accessible structure is located near parking field 1. Wide ramps allow access to interactive features along the play structure. The bathrooms are located in the large building to the left of the playground, which also leads to a wheelchair-accessible boardwalk.

Tanner Park
Kerrigan Road, Copiague
Tanner Park’s spray park features mushroom structures and a large tree with cascading water. The spray area has no borders, making it accessible for those in a wheelchair or with limited mobility. The playground is also wheelchair accessible, with ramps along the play structure.

Veterans Park Playground
Bellerose Avenue. East Northport
The Boundless Playground at Veterans Park was designed using Americans With Disabilities Act standards for accessibility. The facility features ground-level play, adaptive swings, and ramped play structures that allow kids to run or wheel through during a game of chase or tag, for example. There is also a large play structure with a rock climbing wall, twisting ladders, monkey bars, and plenty of slides.

Lowland Park
Lowland Hill Road, Stony Point, Rockland
Casey sisters, Amanda and Kelly, founded Project, with the help of friends and family, donated a wheelchair-accessible swing to Lowland Park in an effort to provide equipment to children with disabilities. Author: Sophia Martini, a former intern of NYMetroParents, is a senior at Syracuse University. She is a true citizen of the world, as she has traveled to five continents, lived in Madrid, and has friends throughout the globe. During her free time, you will find her in the sun, dancing, and sipping some of her favorite rosé. See More