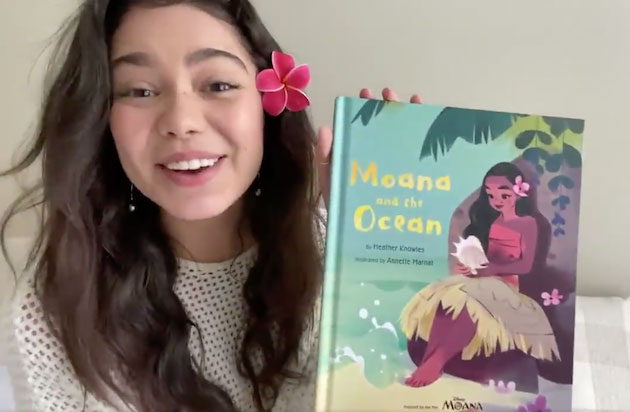 Celebrity Storytimes to Entertain and Enchant your Child

Some actors will read stories that they played a part in—like Auli'i Cravalho, who voiced Moana in Disney’s Moana.


“Horton Hears a Who” by Dr. Seuss, read by Jeff Goldblum

“The Bossier Baby” by Marla Frazee, read by Hilary Duff

“There Was an Old Lady Who Swallowed a Rose” by Lucille Colander, read by Pink

Visit the Save with Stories Instagram page for all of the storytimes.

As part of the Wizarding World's new Harry Potter at Home Portal, actors and other special celebs will read Harry Potter and the Sorcerer's Stone aloud, chapter by chapter each week. This week, Daniel Radcliffe, better known as Harry Potter himself, reads the first chapter "The Boy Who Lived."

Some taking part include:

Molly Idle, author and illustrator of the Rex series

Mika Song, illustrator of Love, Sophia on the Moon

As part of Disney’s efforts to bring Disney magic into the homes of families everywhere while we’re staying safe inside, stars from your kids’ favorite Disney movies are reading Disney stories aloud for you to enjoy.

A story worth fighting for. ? #DisneyLegend @MingNa Wen reads a story from "A Place for Mulan." pic.twitter.com/WP5tILXdXY

Some Disney story read alongs by stars include:

“Moana and the Ocean” read by Auli’li Cravalho, voice of Moana

“BB-8 on the Run” read by Daisy Ridley, who plays Rey in the Star Wars sequel trilogy

“A Place for Mulan” read by Ming Na Wen, voice of Mulan

“A New Purpose” from the Toy Story Storybook Collection, read by Ally Maki, voice of Giggle McDimples in Toy Story 4

For the whole collection of #DisneyMagicMoments Storytime, visit the Disney Magic Moments website or search the hashtag on Twitter.

Every week, Julie Andrews and her daughter Emma Walton Hamilton read a new story that they picked out from “Julie’s Library” via the Julie’s Library podcast.