Catch the Tail on the Dragon

Arrange kids in a single file line, and have each hold onto the waist of the person in front of him. Tuck a bandanna into the pocket of the last child in the line. The “head of the dragon” (head of the line) leads the line in chasing the “tail” (the last in line) as they try to grab the bandanna without anyone letting go of the person in front of them. The middle of the line tries to keep the head from catching the tail. Once the bandana is captured from the tail, the tail becomes the head and they play again.

Use string to tie a balloon to one ankle of each child. Then tell the kids to run around trying to “stomp” or break everyone else’s balloon while keeping their own from getting popped. The last guest with a full balloon wins!

Fun Fact: In ancient times, balloons were made from animal bladders.

Draw funny faces on hard-boiled eggs with a Sharpie. Party guests can then race while balancing their eggs on large spoons. It’s harder than it sounds! (Egg tossing is another classic older kids can try if any whole eggs survive the races.)

Fun Fact: Egg-and-spoon races were part of the festivities during Queen Elizabeth II’s Diamond Jubilee in 2012.

For this game, you’ll need two old blankets or tarps. Divide kids into teams of at least three per team. One sits on the blanket while two teammates grab the front corners of the blanket and run, dragging the “chariot” in a race against the other team. Play this game in three rounds, so that each team member gets a chance to ride the chariot.

Fun Fact: Chariot races were a popular event in the ancient Olympics. The chariots were small, two-wheeled carts pulled by teams of horses—riding these carts was way more dangerous than riding a blanket!

Create your own obstacle course, tailored to the age and abilities of the group. Make this a fun game to wrap up the festivities by combining some of the previous games with a few new ones thrown in. For example, participants could ride a bike or trike around cones, hop a hopscotch course, jump a short distance in a potato sack, carry an egg on a spoon, and then walk a balance beam made of a 6-foot-long two-by-four laid flat on the ground.

Fun Fact: Obstacle courses are a mainstay of military training. 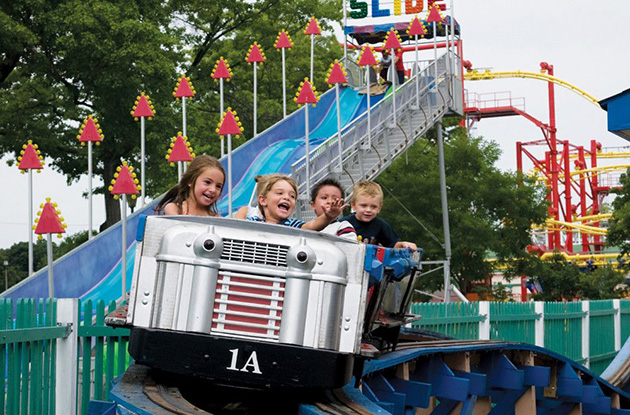 Family-Friendly Amusement Parks in in the New York Area

Updated July 8: Updated coronavirus hours and restrictions for the family-friendly amusement and theme parks in the New York area. Author: Tiffany Doerr Guerzon is a freelance writer and the mother of three children. See More Bubbles big enough to be inside! Balloons sculptures that light up! No matter the event, guests of all ages will be amazed and entertained by our uniq... New York, Froggle Parties offers outsanding kids parties that are high energy and pack a ton of fun!!! As seen on TV! We offer heaps of kids party packa...

Make your party a special one! Dave's entertainment services include over 100 costumed characters: princesses and superheroes and pirates to tea parti...