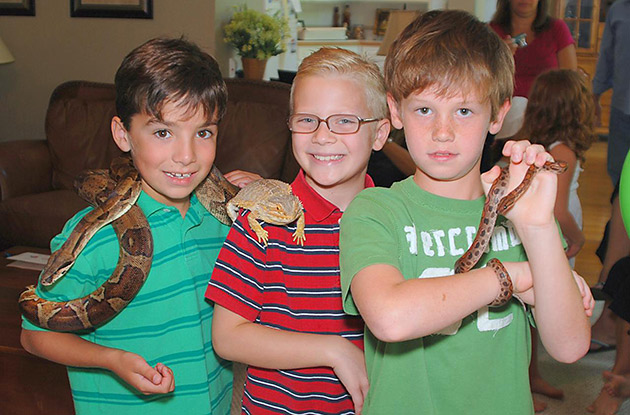 Three trending birthday party themes that break the mold—and how to throw them.

Creating themed party décor looks easy enough on social media, but it can be overwhelming to do yourself. You could consult a party planner, or you could try one of these tricks:

•  Utilize Etsy. It’s a great place to find creative décor, favors, and invitations that look like you made them yourself.

•  For DIYers, start early and stay organized with a timeline. Manhattan mom Summer Ticas, who often creates all the décor herself, says she starts planning six months out.

•  Plan with Pinterest. “I look at all the ideas that come out of the themes and I do spend quite a bit of time creating a board,” Ticas says.

•  Source from wholesalers. In order to save money, Ticas says she sourced fairy gardens for her daughter’s enchanted forest party direct from wholesalers rather than the craft store.

•  Create a balloon garland. It’s one of the most requested items but very easy to do yourself, according to Seri Kertzner, founder of Little Miss Party. “They can be enormous or much more low-key,” Kertzner says, but anything around 10 feet long (approximately 30 balloons) looks fancy and is affordable because there’s no helium. For instructions, check out Little Miss Party’s YouTube tutorial.

Now that you’ve decided to host your own party, figuring out the entertainment is key to happy partygoers.

•  Make the theme age-appropriate. Tarantulas might be great for older kids, but choose something a little easier to handle for toddlers.

•  Do your research. Irvington mom Stephanie Minkoff used word of mouth recommendations and Facebook reviews to help her choose a wild animal handler for her sons’ party. “I probably contacted ten different people, and I got prices from four hundred dollars to four thousand dollars,” she says.

•  Consider low-cost options that fit with the theme. Think: a scavenger hunt, an epic game of hide and seek, or DIY party favors.

If you’ve settled on giving favors to each guest, consider these tips:

•  Don’t give a favor that’s just going to end up in the trash. “I will always do something that is seasonally related or something that’s going to be useful to the parent or child,” Kertzner says. For example, personalized water bottles in the summer and mittens in the winter.

•  Bring spares in case an extra guest turns up. “I always have extra favors on hand now,” Kertzner says. “If I end up with extras at the end of the party, I use them as gifts or return them.”