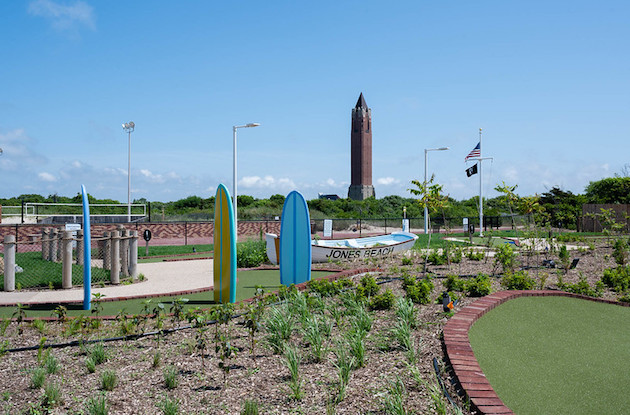 
The West Game Area is one of several areas at the Jones Beach State Park to see massive improvements over the past decade. There has been a push to improve the greenery at the park. As a result, the West Bathhouse and East Games Area at The Central Mall has had new lawns and planting beds, new irrigation and electrical systems, shrubs, ornamental grasses, and seasonal plants. In addition, playgrounds, the Boardwalk Café, and the WildPlay Adventure park opened because of the state’s plans.

In the last two years, the park has undergone other changes to better each guest’s visiting experience at the park. Last summer, the Jones Beach Shared Use Path, a 4½-mile trail for walking, running, biking, and skating along the shoreline, opened to the public. Plus, the East Games Area was updated with new basketball courts, lighting, fencing, benches, and water fountains.

Jones Beach State Park has been an iconic feature in New York since it originally opened in 1929. In 2005, the National Register of Historic Places added the park to its list. The park has 6½ miles of beaches for walking and swimming, along with a boardwalk to get a different view of the shores.

The park is home to a wide variety of natural beauties, including many species of birds, shells, and horseshoe crabs along the shore. These new amenities add to the overall experience of visiting Jones Beach State Park, while preserving the vast and gorgeous shoreline wildlife that has always been present at the park.

"Governor Cuomo's commitment to Jones Beach will benefit visitors for many years to come," said State Parks Commissioner Erik Kulleseid. "This park is a jewel that is shining brighter than ever."

Things to Do with Kids on Long Island this Weekend

Enjoy these fun weekend activities with your kids on Long Island. Start planning your weekend now.