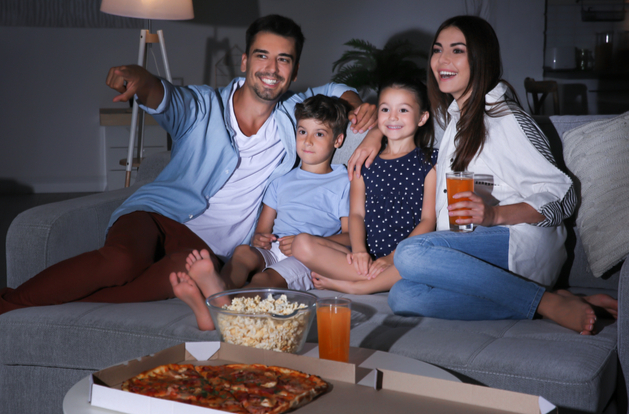 26 Kid-Friendly Documentaries to Watch with Your Children

Add these true-life films to your daily schedule—they will educate and entertain the whole family.

Advanced Style
Where you can watch it: Amazon Prime, Google Play, VUDU, and iTunes
In this spirited documentary about NYC women ages 62-95, photographer Ari Seth Cohen has turned his personal affinity for the artistry and wisdom of his own grandmother into a tribute to mature women who think that living well is the best revenge.

Behind the Curve
Where you can watch it: Amazon Prime, Netflix, and iTunes
An exploration of conspiracy theories and the very human tendency to construct our own realities despite what common sense and logic might say. We learn why some people are more likely to find conspiracy theories and believe in them, even at the expense of losing friends and loved ones.

Dancing in Jaffa
Where you can watch it: Amazon Prime, Hulu, Google Play, and iTunes
A ballroom dance teacher returns to his home in Israel to teach Palestinian and Jewish kids to dance together. In the process, he learns about religious tolerance—and intolerance.

Time for Ilhan
Where you can watch it: Amazon Prime, Google Play, and iTunes
Director Norah Shapiro and her team follow Ilhan Omar's successful quest to become the first Somali American Muslim woman elected to public office in the United States.

Hoop Dreams
Where you can watch it: Amazon Prime, Hulu, HBO GO, Google Play, and iTunes
A long-celebrated, Oscar-winning film about two black teens trying to make their dream of playing in the NBA come true. As they vie for scholarships, they face issues of race and class, urban blight and violence, and teen pregnancy.

Taylor Swift: Miss Americana
Where you can watch it: Netflix
An important film for girls and teens about self-worth—we see Swift’s evolution from a musically gifted child to an illustrious superstar. Only a few songs are filmed in their entirety, so it’s more of an intimate look at Swift's journey as she wants it told.

Kid-Friendly Documentaries for Ages  15 and Older

Matt Shepard Is a Friend of Mine
Where you can watch it: Google Play, VUDU and iTunes
Learn about the life and tragic death of Matt Shepard, a young gay man killed in a terrible hate crime. Despite the tragic subject, the film explores friendship, love, and forgiveness, rather than focusing on the anger and intolerance that triggered Shepard's death.

Minding the Gap
Where you can watch it: Hulu
This Oscar-nominated documentary made by filmmaker Bing Liu follows his three skateboarding friends who come from abusive homes. Liu observes and interviews his friends with a sensitivity that makes their struggles seem both relatable and, sadly, preventable.

My Scientology Movie
Where you can watch it: Amazon Prime, Netflix, FandangoNOW, Google Play, VUDU, and iTunes
Broadcast journalist Louis Theroux attempts to find a way into the inner workings of Scientology. The film will inspire discussion about how information and the truth are pursued by documentarians, and the media as a whole.

People's Republic of Desire
Where you can watch it: Amazon Prime, Google Play, and iTunes
This subtitled documentary follows two of China’s streaming platform YY's biggest stars over the course of a year, showing how both get sucked into the panic of trying to keep their success going, no matter the cost.

For Sama
Where you can watch it: Amazon Prime, FandangoNow, Google Play and VUDU
An intimate documentary chronicling filmmaker Waad al-Kateab's life in Aleppo, Syria, during the country's civil war: first as a student during the Arab Spring in 2011 and then as a citizen journalist who falls in love, marries, and has a baby girl named Sama.

One Child Nation
Where you can watch it: Amazon Prime
A brutal look at China’s one-child policy and how it played out in the lives of regular people, including truly horrific acts like forced abortions and sterilizations, the destruction of houses, and even babies who were born alive but killed by midwives.

They Shall Not Grow Old
Where you can watch it: Amazon, FandangoNOW, Google Play, HBO GO, VUDU and iTunes
Oscar-winning director Peter Jackson takes century-old footage of World War I and restores it in color with sound effects, spoken voices, and narration. The effect is astonishing although the war-time violence makes it best for older teens.

For more information about these films and other recommended documentaries, check out Common Sense Media.