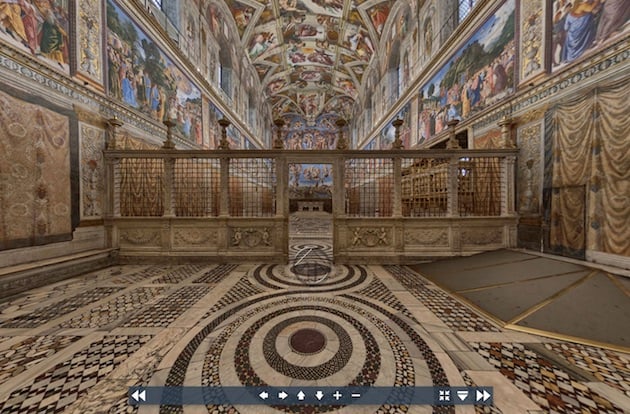 You can see the worldwide masterpieces through these museum virtual tours from famous museums.

Virtual Tours of Kid-Friendly Museums Across the Globe

How about a trip to Paris? Grab a baguette (or whatever sustenance your kids haven’t yet eaten) and explore the Louvre's Egyptian antiquities and the recently restored Galerie d'Apollon, which houses the famous “Apollo Slaying the Serpent Python,” by Delacroix (1851).

The kids will enjoy this trip through the second-oldest children's museum in the United States, where they can become dinosaur experts and learn about Japanese culture at the Japanese House, a real two-story townhouse from Kyoto.

Tour the Great Court or discover the ancient Rosetta Stone and Egyptian mummies, among hundreds of other artifacts at this famous historical institution.

This famous American-art museum is offering two online exhibits: American fashion from 1740 to 1895, including clothes from the colonial and Revolutionary eras; and works by Dutch Baroque painter Johannes Vermeer.

Check out the largest collection of artworks by Vincent van Gogh, including more than 200 paintings, 500 drawings, and more than 750 personal letters. You can also find out about Van Gogh’s love life and which books he read.

This collection of over 21,000 works focuses on images of famous Americans and how they’ve shaped U.S. culture. The virtual tour features 10 collections (including “First Ladies” and “Portraits of African Americans”) and also offers digital workshops and learning resources for kids.

This Barcelona-based museum contains 4,251 works by the famous painter, most of which you can see on the online tour—which also includes photos of Picasso’s homes and studios in Spain.

Marvel at the magnificent ceiling, painted by Michelangelo between 1508 and 1512. The primary panels of the ceiling showcase nine scenes from the Book of Genesis.

The 11th most visited museum in the world has over 325,000 square feet of exhibition space, with 145 million specimens of plants, animals, fossils, minerals, rocks, meteorites, human remains, and human cultural artifacts including the Hope Diamond and the Star of Asia Sapphire—which are now viewable from your own home.

You can “walk” through the whole space and aviation themed museum which contains the Apollo 11 Command Module Columbia, the Friendship 7 capsule, the Wright brothers’ Wright Flyer airplane, and Lindbergh’s Spirit of St. Louis.

Check out the original Star-Spangled Banner, Julia Child’s kitchen, Abraham Lincoln’s top hat, and Indiana Jones’ fedora and whip in the museum’s online exhibits—each with a mix of photos, video, graphics, and text.

Main image: A screen shot of the whale at the American Museum of Natural History, which you can see on the Google Maps street view as part of Google Arts & Culture

58 Easy, Fun Things to Do with Kids at Home

Find 58 easy, fun things to do with kids at home, including arts and crafts for kids, indoor activities for kids, kid-friendly recipes, and more!

The traditional New Year's Eve Times Square Ball Drop is closed to the public this year, but families can ring in 2021 with broadcasts, livestreams, a... Huntington, At Sylvan of Huntington, every child’s learning plan is unique. We mix the best in teaching and technology to ensure your child gets just what he or s...