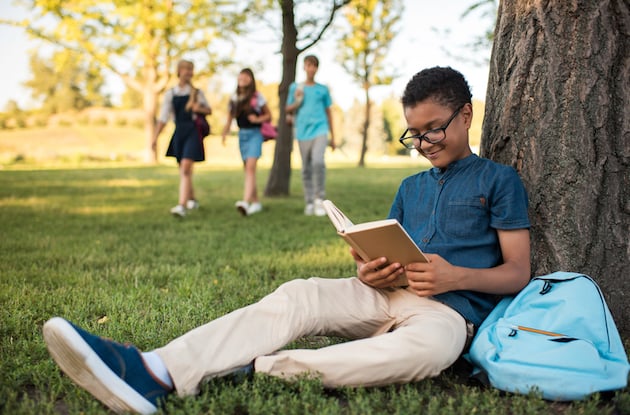 Teens can filter by their favorite genre or a mood they're in to find the perfect book to get them reading again.

Attack on Titan by Hajime Isayama

In the walled enclave where the remnants of humanity shelter from the Titans, giant creatures who have taken over the rest of the world, Eren and Mikasa join the fight.

A totalitarian regime has ordered all books to be destroyed, but one of the book burners, Guy Montag, suddenly realizes their merit.

The Giver by Lois Lowry

Given his lifetime assignment at the Ceremony of Twelve, Jonas becomes the Receiver of Memories—a position shared by only one other in his community—and discovers the terrible truth about the society in which he lives.

Here's the full list of Dystopian Books for Teens.

Annie on My Mind by Nancy Garden

Liza begins to doubt her feelings for Annie after someone finds out about their relationship, then realizes, after starting college, that her denial of love for Annie was a mistake.

When Paul falls hard for Noah, he thinks he has found his one true love, but when Noah walks out of his life, Paul has to find a way to get him back and make everything right once more.

If You Come Softly by Jacqueline Woodson

After meeting at their private school in New York, Jeremiah, who is black and whose parents are separated, and Ellie, who is white and whose mother has twice abandoned her, fall in love and struggle to cope with people's reactions.

Tell Me Again How a Crush Should Feel by Sara Farizan

Having never developed romantic feelings before her junior year in high school, Persian American Leila forges deeper bonds with supportive classmates after confiding in them her newfound attachment to a sophisticated girl.

Here's the full list of Love Stories for Teens.

The Hunger Games by Suzanne Collins

In a future where corrupt rulers maintain control through a televised survival competition that pits young people against each other in a fight to the death, Katniss Everdeen's skills are put to the test when she voluntarily takes her younger sister's place in the Hunger Games.

Happy More Than Not by Adam Silvera

After enduring his father's suicide, his own suicide attempt, broken friendships, and more in the Bronx projects, Aaron Soto, 16, is already considering the Leteo Institute's memory-alteration procedure when his new friendship with Thomas turns to unrequited love.

In a futuristic world, teenaged Nailer scavenges copper wiring from grounded oil tankers for a living, but when he finds a beached clipper ship with a girl in the wreckage, he has to decide if he should strip the ship for its wealth or rescue the girl.

You can also filter by biography and memoir, fiction, fantasies, graphic novel, historical fiction, horror, modern classics, nonfiction, and poetry. The Library also released its 125 Books we Love for Adults on Valentine's Day and 125 Kids Books We Love on May 22. New City, NY For over 30 years, Vicki's Dance Studio has been inspiring and motivating our students to follow their dreams both in dance and in their lives.