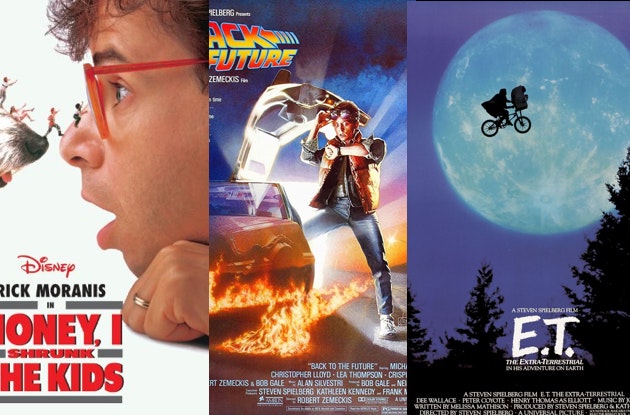 Where to Watch 80s Movies Your Kids will Love

Reminisce on simpler times with your fam by watching one of the best 80s movies to watch with your kids.


80's Movies for Tweens and Teens

The Neverending Story
Ages: 10+
Where to watch: Stream on HBOMax, Purchase or Rent on Prime Video, Purchase or Rent on iTunes
Based on the 1979 novel (have your kids read it first!) this epic fantasy adventure was released in 1984. It follows a boy who ducks into a bookstore to escape bullies and discovers a book called The Neverending Story. The film is a wonderful reinforcement of the power of reading and imagination.
Rated PG. The faceless “Nothing” of the story and some intense scary scenes.

The Goonies
Ages: 12+
Where to watch: Purchase or Rent on Prime Video, Purchase or Rent on iTunes
Based on a story by Steven Spielberg and a screenplay by Chris Columbus, this 1985 adventurous romp follows a group of misfit kids who discover an ancient pirate map and embark on an adventure fraught with perils.
Rated PG. On re-watching this as a parent, you may be surprised at how many curse words and quasi-innocent sexual innuendos could still pass for a PG rating in the ‘80s. The young boys in this movie are just starting to discover girls.

The Princess Bride
Ages: 10+
Where to watch: Stream on Disney Plus, Stream on Hulu, Rent or Purchase on Prime Video
This 1987 fairytale fantasy adventure will appeal to princess lovers and pirate lovers alike. Based on a novel, The Princess Bride’s story is told by a grandfather reading to his grandson, who is staying home from school while sick. There’s a ton of witty banter and lots of talk of true love, which the boy in the story finds “yucky.”
Rated PG. Lots of sword-fighting type violence, one scene of torture tinged with comedy, mention of a woman’s breasts.

Back to the Future
Ages: 11+
Where to watch: Rent or Purchase on iTunes
In this 1985 science fiction classic, a teenage boy is accidentally transported to the 1950’s and meets his parents as teenagers, disrupting them from dating. He needs to make sure that they get together so that he will still be born in the future. A great way to introduce ideas relating to time travel and how our actions determine our future. *Bonus: if you like this movie, it has two sequels!
Rated PG. A bully tries to pressure a teenage girl into making out with him and the scene nearly becomes violent before someone stands up to him, some mild language, some teenage sexual themes. Jennifer Weedon Palazzo is a writer, actor, video producer, and the founder of MomCaveTV.com, an online network of award-winning comedy videos for parents. She lives with her husband and two very spirited children.