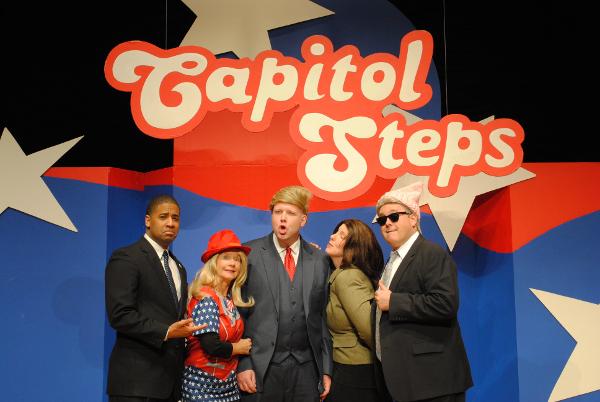 The Capitol Steps- The Lyin’ Kings

The Capitol Steps, America's political musical satire troupe that has been putting the "mock" in democracy for over nine Presidential elections, brings their newest show, The Lyin' Kings, to the Paramount Hudson Valley! The Lyin' Kings, drawing its humor from today's headlines and twitter feeds, is based on The Capitol Steps' recent CD of the same name, plus political happenings since then, from Presidential debates to Brexit, to Impeachment, and more. What better time to see the Capitol Steps than now, with the next Presidential election season approaching? The show will include the latest songs about the Democratic primary candidates ("76 Unknowns") the newest late-night thoughts from President Trump ("Tweet It"), and quid pro quo ("There is Nothing Like Ukraine") . No one knows what the new decade will bring, but whether it's Mayor Pete Buttigieg, Alexandria Ocasio-Cortez or Joe Biden, the Capitol Steps can tell you what rhymes with it! Whether you're a Democrat or Republican (or somewhere in-between), if you've ever wanted to see Donald Trump sing a rock song, Bernie Sanders sing a show tune, and Vladimir Putin dance shirtless- this is the show for you! And since the Capitol Steps mine their laughs from materials ripped from today's and tomorrow's headlines, you never know whether Nancy Pelosi, William Barr, Rudy Giuliani, Volodymyr Zelensky or Kim Jong-Un might appear on stage together in a song! The Capitol Steps began in 1981, when a group of Congressional staffers got together to provide entertainment for a holiday office party on Capitol Hill. Since then, the company of professional actors and singers have provided their unique mix of musical and political comedy and satire to audiences coast-to-coast.