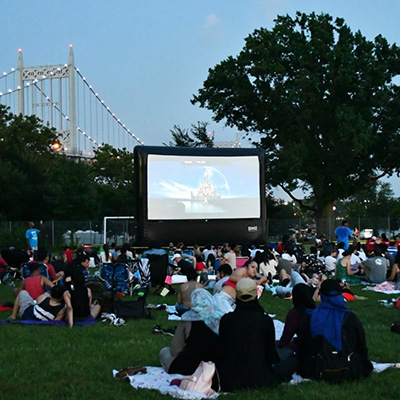 Bring a picnic and come out for a movie and a night of outdoor fun. Movie (Dune) starts at 8pm. Location: Icahn Stadium

Other Events at Randall's Island Park

Randall’s Island Park offers New Yorkers over 60 athletic fields (more than half the fields in Manhattan!); Icahn Stadium, a world-class track & field facility; the Sportime Tennis Center, which features 20 state-of-the-art courts; the Randall’s Island Golf Center, comprising a driving range and two miniature golf courses; and miles of waterfront pathways. RIPA has focused not only on developing the Park’s athletic facilities but also on restoring the Island’s natural resources. In spring 2008, RIPA completed a $5 million restoration of the Island’s Little Hell Gate Inlet salt marsh and freshwater wetlands; today, the sites improve water quality as well as provide precious wildlife habitat. The Park also features an Urban Farm comprising a wide variety of produce in over 80 vegetable beds, including four rice paddies and an apple orchard. Additionally, the Alliance has made it a priority to better the Island’s passive recreational areas, which has resulted in improved picnicking areas as well as scenic pathways for walking, running, and bicycling.

In addition to athletic facilities and expansive natural areas, the Island is also home to a sprawling event site that hosts a number of special events every year. Located between Icahn Stadium and the Harlem River, the event site has welcomed notable concerts, art fairs, and cultural festivals, including Governors Ball and the Frieze Art Fair.

Randall’s Island Park now attracts over 3 million visitors to the Island per year, many of whom are local children and families who participate in our free public programming.